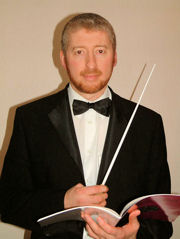 Jim Cooke was born in 1959 in Sheffield but has lived in the West Lancashire area since the age of 10. He was awarded the Guildhall School of Music and Drama Diploma in Composition in 1979, and at that time began studying arranging with John Harper (guitarist and arranger with Atarah's Band) and composition with the St Helens-based composer David Forshaw.

Whilst at college he formed a concert orchestra and also conducted the college wind band for a time. Sine the early 1980s he has conducted several choirs in the Liverpool and Manchester areas and been musical director for many amateur operatic productions, whilst also being a member of the Royal Liverpool Philharmonic Choir since 1988. He previously played trombone with Ormskirk Music Society until being appointed conductor in 1992. He is active as a freelance composer, arranger and musician.